Financial cost of taking care of the work :

Nature of the support : Artisanal linen canvas on stretcher

Muses & A.R.T. was contacted about this painting by the Institut Départemental Gustave Baguer, a school specialising in the schooling, re-education and education of young people with hearing and/or language disorders. Through the intervention of our association, it is a question of highlighting an illustrious character from the history of the institute.

The work in question dates from the 19th century but is posterior to the figure. It was probably commissioned as a tribute to the man Thomas Gallaudet who represented the deaf community. An identical work from 1851 is shown on Wikimedia with the author George Frederick Wright (1828-1881), a portrait painter and great friend of Thomas Hopkins Gallaudet (see photo). We have exchanged with American institutions to trace some of the history of the painting. Although we do not know where Wright’s work was exhibited, it is possible that our painting is one of the many existing copies of this original American work.

The frame or stretcher, the supporting structure of the work, is made up of four wooden battens that allow the canvas to be stretched evenly. To ensure this, it must be chamfered, bevelled, on the inside of its members so that the canvas is not in contact with the wood. This chamfer prevents the appearance of stretcher marks on the periphery of the work.

We are dealing with a simple frame with a half-timbered joint. It is not standard, whereas in the 19th century, standardisation was the norm. The members of the frame are chamfered on both sides, but too weakly and are not bevelled across their entire width. The absence of keys to regulate the tension of the canvas is also noteworthy.

The support of the work is a linen canvas with a twill fabric, which is quite rare because these textiles were expensive. The weave is industrial, medium and tight. The quality of the chamfer on the frame and the format of the weave of the canvas may indicate an American origin of the materials and therefore possibly of the copy, although we are not in a position to say for sure.

The preparation or gesso is characteristic of 19th century works, namely a white tone. Tests will be carried out to validate its composition. As for the mechanical resistance of the coloured layer, it seems to meet the requirements of the oil technique.

Examination of the work with the naked eye and under binoculars shows with certainty that the coloured layer is protected by a varnish film.

The painting shows pathologies resulting from inappropriate conservation measures. Indeed, the first signs of a stretcher mark can be seen all around the work : this is due to the stretcher which is not sufficiently chamfered and whose protruding internal edges are imprinted in the paint layer through the canvas in contact with the wood members. In the long term, this defect can lead to a loss of paint.

There are also a few deformations of the canvas due to probably unscrupulous handling and a few small gaps due to the piercing of objects such as small nails around the edges or scratches.

The visible lacunae are of human origin and not related to the conservation conditions, resulting in small alterations that are not very serious for the durability of the work, such as superficial scratches.

The painting shows a general alteration of its tones and a yellowing of the varnish, which is quite oxidised, as well as visible soiling in the structure of the coloured layer. 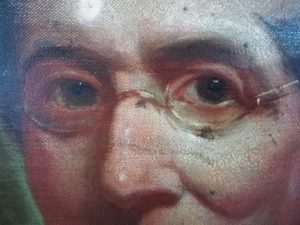 The first operation carried out consists of facing the work using paper and an adhesive resistant to mechanical stress. This facing will ensure the protection of the painting during the conservation of the support and will avoid the loss of pictorial material.

The stretcher of the work will be removed, consolidated and cleaned. A chamfer made of inert material will be added to the existing one to raise the canvas and avoid its contact with the stretcher bars.

The back of the canvas will be cleaned to remove dust and dirt pocket that may, in time, attack the cellulose of the textile fibres.

The deformations of the support will be treated to allow it to recover its original flatness. The holes in the textile and other damage will be consolidated by a non-woven fabric, and the edges will be reinforced by the addition of non-woven tension strips, which will serve to tighten the work on its frame.

The pictorial layer of the work is stable and will not require curative treatment. The visible gaps are of human origin and are not related to the conservation conditions ; they will only require aesthetic restoration.

The yellowish varnish will be lightened by thinning its surface layers with solvents.

The filling of the lacunar zones will then allow, by the addition of a synthetic paste, to fill in the loss of pictorial material and to bring a continuity of structure with the pictorial layer surrounding these gaps. The coloured reintegration of the missing parts will then follow : it allows the work to be legible and contributes to an “aesthetic” rendering. The retouching will be illusionistic, i.e. not discernible from the original coloured layer.

A final varnish will be applied to protect the original coloured layer and the retouching. This final varnish has an aesthetic and conservation role. Based on synthetic resin and petrol, it will guarantee the work transparency and protection against environmental aggression.

A Big Thank You to You !