Or ask it for free via our contact form !

"Hippolyte, Paul, Auguste: The Flandrin, artists and brothers", an exposition

The Musée des Beaux-Arts de Lyon pays tribute to the Flandrin brothers, Auguste, Paul and Hippolyte, until September 5, 2021. The museum has a collection of about two hundred works by the three brothers. The exhibition shows nearly three hundred paintings, drawings and photographs, half of which come from private collections.

Born in Lyon in the 19th century and of modest means, the Flandrin family all three had a passion for painting, which they discovered at the Palais Saint Pierre – then and now Musée des Beaux-arts de Lyon – . They were very close and collaborated their entire lives. They excelled in portraits, but each had a favorite field : portraiture for Auguste, monumental decor for Hippolyte and landscape for Paul.

All three studied at the Ecole des Beaux-Arts in Lyon, then in the Palais St-Pierre.

In order to support his family, Auguste, the eldest, began to work in lithography and achieved a certain success. He sacrificed his career as a painter so that his brothers could follow their vocation and go to Paris.

From Ingres’ workshop in Paris… to Italie

Without resources, Paul and Hippolyte made the journey on foot in 1829. In Paris, content with one meal a day, they deprived themselves of everything and worked relentlessly. They were lucky enough to enter the studio of Jean Auguste Dominique Ingres, one of the most prominent artists of the time, and formed an almost filial relationship with him that lasted throughout their lives. Paul and Hippolyte adopted Ingres’ fundamental principles : the cult of authenticity and the primacy of drawing. At the same time, the Flandrin brothers enrolled at the École des Beaux-Arts in Paris, which is above all a place for competitions. The most important one being the Prix de Rome that Hippolyte won in 1832 in the category of history painting. He then benefited from a five-year stay in Rome at the Villa Medici, paid for by a state pension.

In accordance with the rules of the Prix de Rome, Hippolyte sent a painting of a nude figure to Paris each year. He painted a series of male nudes, the most famous of which is the Young Naked Man Seated by the Sea :

After Hippolyte’s departure to Rome, Auguste joined Paul at Ingres’ studio in 1833.

In 1834, Paul joined Hippolyte and they traveled together through Tuscany and Umbria. Then Auguste joined them in 1838 and they went to Naples. They discovered the Italian nature with which each of them developed an exclusive relationship. Numerous delicate watercolors testify to their stay which was decisive for all three.

They returned to France in 1838. Auguste went back to Lyon where he became the favorite portraitist of the bourgeoisie until his untimely death in 1842 at the age of 38. Paul and Hippolyte returned to Paris where they painted the Tout-Paris. They also received various public commissions. Paul assisted his brother who was particularly distinguished in the field of large-scale decoration. They were commissioned for public buildings (Hôtel de Ville, Conservatoire des Arts et Métiers in Paris) and especially for churches which, having lost their paintings during the Revolution, needed to be decorated. One of Hippolyte’s major projects is the church of Saint-Germain-des-Prés (which has just been restored). He decorated the sanctuary, the choir and the nave. He used the technique of wax painting.

The exhibition devotes a room to the virtual visit of the church in which the viewer is immersed.

Appointed Chevalier of the Legion of Honor in 1841, Hippolyte was elected member of the Academy of Fine Arts in 1853. He became a professor at the École des Beaux-Arts in Paris in 1857.

Paul, for his part, was named Chevalier de la Légion d’Honneur in 1852. After the death of Hippolyte, he finished the decoration of the nave of the church of Saint-Germain-des-Prés. He continued his career and exhibited his landscapes and portraits every year. He died in 1902 at the age of ninety-one.

Until the 20th century, the Flandrin brothers, whose painting was considered too academic, were forgotten. Then in the 1980s, classical painting and painting in Lyon were studied again and the Flandrin brothers were reconsidered. The strong, almost twin links that unite them and their shared and intertwined careers give them a special place. 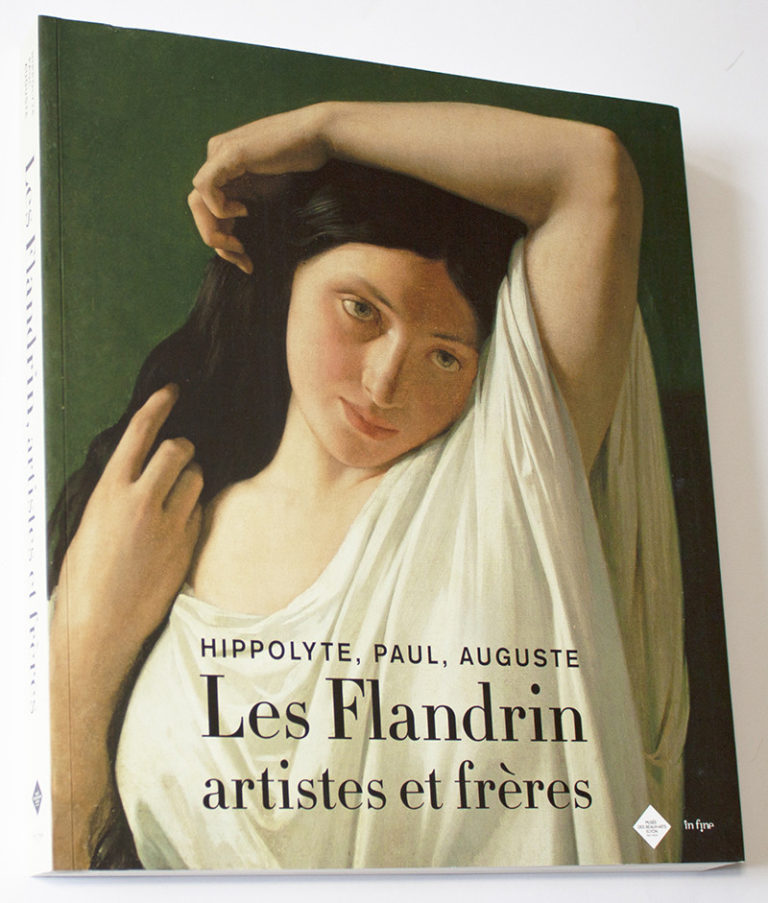 To feast your eyes on the exhibition Hippolyte, Paul, Auguste: The Flandrin, artists and brothers, go to the Musée des Beaux-Arts de Lyon, from May 19 to September 5, 2021 !

And to continue reading, consult the Press Kit of the exhibition (pdf in french only) !

To feast your eyes on the exhibition Hippolyte, Paul, Auguste: The Flandrin, artists and brothers, go to the Musée des Beaux-Arts de Lyon, from May 19 to September 5, 2021 !

And to continue reading, consult the Press Kit of the exhibition (pdf in french only) !

The signature of paintings